), and half profile
Weakness: Dramatic and Annoying, and bad (full) profile (like side of the face)
Favorite Fashion Quote: "I strive to be model thin" "Paris thin is what makes a model" “So soon as a fashion is Universal, it is out of date.”

Bio: Elaina, was born in the U.S after her parents migrated from their poor family in Japan, to try and give her a better life before she was born. So they got their visas and moved to New York City, New York. Elaina doesn't know any of her other family members, except her parents. Growing up, she lived in a small apartment with her parents until she was 15 and they finally moved out of their small apartment into a very spacious room. Her father worked his way up the social and business ladder at his work and her mother ended up interning @ elle magazine and then was upgraded to personal assistant to one of the editors (not that that's much better) All her life in the US aside from Elementary school, Elaina had been quite popular due to her gorgeous stomach and skinny frame, because of the fact that she was bolemic (I do know someone who has had the problem of being bolemic and is very very popular because of it, and its unfair but it happens and Im only being real, and in no way do I support bolemia. I think it is a terrible sickness, but Im just trying to bring something to my sim) As soon as she became popular she started changing her nice ways into mean ways. And all her friends were wealthy so she learned a lot about fashion from them and decided it might be something to pursue, after her parents paid for a photographer to photograph her she decided she wanted to take up modeling. Shes been doing lots of studying of fashion and is ready to take these bithces out one by one.

She is such a beauty Nicolla! OMG she's one of my faves 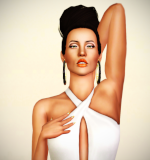 Oh shut up. You have the Glamazonian Princess, no need to pretend that your app isn't the best. 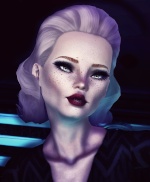 Dang she's one hotty! Lurves her!

2nd photo is up 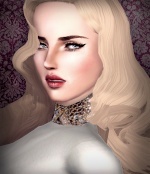 She's stunning ! And I love her lips 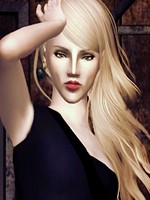 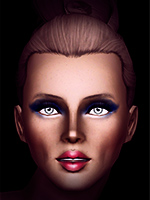 Wow haha! Thank you guys all so much!!!! I appreciate it!