SFTNF - All About Fashion for Sims
Would you like to react to this message? Create an account in a few clicks or log in to continue.

Jordan was born and raised in Harrisburg, in Oregon (USA). She lived in this little town a calm and nice childhood with her two parents and her big brother, Evan.
Jordan has this passion for mode since her teenage. She started reading fashion magazines at the age of 13, and she realized how this art on the human body is amazing.

She decided that she will do everything to live with her passion. That's why she left Harrisburg to move into Portland (Oregon). She knew that, in this big town, she would have the possibility to be a part of the "fashion world". Her parents didn't really agree and thought that she wasn't ready for this, but she decided to live her dreams, no matter what will people say, and no matter how difficult it will be !
Now, it's been six month since she's in Portland. She has a nice job as a stylist in a beauty parlor, and she is starting to getting known in this city.

But stylism is not the only thing that she loves in fashion : Jordan is fascinated by modeling ! She already did several shootings and found out how amazing it is to do this. She also has participated to Miss Rabiere And Co 2012. She made it to the finale, but has unfortunately lost on the verge of victory.

But a defeat is not the end for Jordan. That's why she is here, doing her best to BE the best...
She is here for FASHION ! 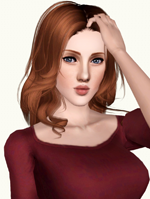