She is an in-game born Sim

At the beginning I had soo many ideas for this Assignment and my first decision was to go with Asian style to try something different. But however I couldn't find a fitting black jacket to a kimono, so therefore, since Kiara (and I) absolutely love fashion which contains studs, I decided to go more into the "personality representation" direction and went with that style

Close pictures are Kiara's strenghts. Her eyes just always have a magical effect on the viewer and I love taking advantage of that.
When it comes to Makeup Ads I personally prefer the really close shots from the model's face where you can almost count every pore and take a closer look at the makeup on her face.
I just thought about what kind of advert would attract me most and... This was the result.
Plain white background, focus on model. The green eyeshadow draws the attention to her eyes, but the soft rose lipstick and the light blush make the makeup still look natural

I really really love those adverts where the model has a magical makeup facemask on with exaggerated eyelashes, really white skin etc.. They have always fascinated me so I decided to step out of the usual high-fash adverts scheme and do something very own and creative and this was the result
I made a symbolic change of Kiara's eye colour and picked the makeup correspondingly. Blue is calming, white is the color of purity, red is the colour if love - and I wanted the picture to spread a calming, magical and attracting atmosphere with a pure beautiful face. I chose a really simple facial expression to underline the pure beauty part.
I thought the flowers would be an adequate rounding for this face and - of course - serve to attract the attention of the viewer but still keep the shiny face in the foreground

Kida is a strong, independent, smart and brave woman who always appears self-confident what I tried to demonstrate with the pose. Also she always has Milo around who adores her and he looks up to her, what he also does in the picture. The rose in his hand was supposed to demonstrate his love to her.
I added the facial tattoo, the ocean diamond, the white on her dress (standing for her white hair), the blue part of the dress and the gold accessories because they are typical for her.
Since Kida loves nature I chose this setting but still added the - for her - typical water-element through the fountain and the lightly blue atmosphere in the picture.

This picture was inspired by the bible quote "And sloth will be thrown in snake pits".
We see a really lazy Kiara with a small belly, slowly turning one with nature because she never moves.
The huge snake around her body symbolizes the fact that she has accepted her destiny of going to hell for her laziness and she's getting used to snakes.
Also the hellgate in the background symbolizes that she will definitely go to hell and the red light coming out of it is already shining onto her body and starts taking over her.
I made the two servants faceless because Kiara would be too lazy to socialize with them, they only have ears left to take her orders and serve her so that she doesn't have to get up and take care for herself.
I tried to make her look tired but seductive.
I have picked an older aeon (Egyptian time) to represent that this Sin has always been a huge problem for humans, especially back that time when slaves were allowed so that kings/rulers didn't have to do ANYTHING.

I picked swimming / underwater ballet (can be interpreted as both). Kiara is wearing a swimming hat and a bathing suit covered under tulle and a pretty long skirt - that was my attempt to make it look more like high fashion^^
The blueandwhite makeup was supposed to underline the water element, I also tried to include water reflections on her body

I have always been fascinated by this expressionist painting and I hope I could do it justice.
It expresses death, fear and at the same time somehow love. The painting itself is a Scream of Nature, so the the colours in it are screaming.
It expresses desolation and has a compulsive and disturbing impression on the viewer.
To me it also kinda expresses the enormety of pain - the lack of ability to express the intensity of the internal state.
I tried to show the relationship between the figure and the landscape as well as I could. Kiara is wearing a black suit just like the figure in the painting itself and also has a dark and disturbing impression on the viewer - I intentionally avoided any colour on her just like on the original figure. Whereas the strong red-orange colours of the sunset in the background are supposed to "scream" in endless pain just like in the original painting - and the colours are also shining and reflecting on her suit so it affects the person.

Art is not what you see, but what you make others see

Biography:
Born as the daughter of the inheritor of Armani – Lorenzo Gates – and the really successful model Amila Chanel, Kiara had perfect preconditions for her modeling career.
Unfortunately her childhood wasn’t that easy. She suffered a lot from the fighting between her parents, who just didn’t get along with each other. The thought of being the outcome of cheating had always  troubled Kiara. Being aware of her mother’s depressions and seeing her suffer due to her anorexia, Kiara became more and more overweight, which caused her schoolmates to bully her. That – in turn – gave her the feeling that she was not worth being her parents daughter.
Everything became even worse when the guy she was in love with pushed her to make love with him and she became pregnant after her very first time with 13.
Her mother flipped out and after beating her daughter up out of rage, she forced her to abort the baby what lead Kiara to a mental breakdown after which she slipped off her parents house and lived in a youth center for a year.
In that time Kiara lost a lot of weight through finding her true love in doing sports and slowly fixed her life. Since her mother showed improvement as well she decided to go back to her parent’s house and got along better with her mother than ever before.
Kiara started her modeling career immediately after finishing high school. 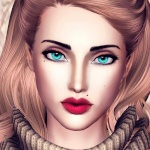